December 15 Update- the magical end to a year of hard work!!

Firstly Thankyou to all those people that have taken the time to read my blog over the course of this year, I really appreciate all your support, encouragement & kind words of praise!

Secondly a quick second to reflect on how lucky I am to walk away from my first Season as a Professional a triathlete with so many boxes ticked, goals accomplished, thousands of hard miles under the belt, some massive PB's, wins, podiums, national anthems sung & lessons learnt! With the surreal bonus this sport offers of traveling to such amazing places all over the globe & making many new lifelong friendships along the way!!

I finished the season with Hamilton Island triathlon festival and then the last Asian Cup of the year in Pariaman- West Sumatra Indonesia. As my coach Mick said perfectly "the higher you go in this sport the sweeter & less likely the wins, so take them & celebrate them while you can!"
I'm just thrilled to be able to finish my end of season race campaign with two from two performances/ victories!!

Racing & travelling for my first time (and definitely not my last) to Hamilton Island was amazing. It seriously is Paradise in terms of race locations, while still providing the goods with a tough ass course, which is what I love!! 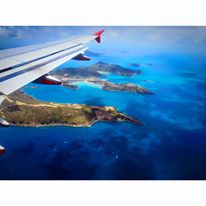 For those that haven't been its a pretty small island so to make up the sprint course distance meant plenty of hills & we're talking decent hills, a beach/ ocean swim at the crystal blue waters of Catseye Beach, a very unique feature to the race where they actually closed the international airport of Hamilton Island to allow us athletes to ride on the runway, & of course a scenic 5km run loop with you guessed it... More hills but a beach run along the shores to finish! Pretty cool, & no I haven't been paid by Hamilton Island Tourism to recruit for next years race or your next holiday although I highly recommend haha.

Travelling with 3 of my best mates from our HPT training squad who also raced & close girl friend Tanya, who is always up for any adventure, we were bound for good post race fun!! 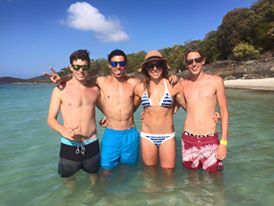 With the likes of Emma Jackson (2012 London Olympain) and Grace Musgrove it was going to be a hot race & I planned to race hard & have a good little battle for the win! For me on race day things played in my favour & I was able to lead from the gun. 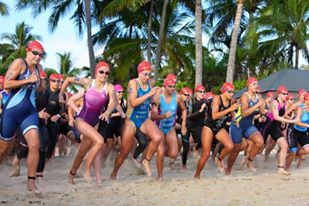 Establishing a key lead in the swim, while working hard on the bike to pull ahead further before hitting the run where to my surprise I made it three from three, having the fastest Female run split for the event too.  Crossing the line first on cloud 9, having just beat one of my idols in the sport watching Emma in London 2012 (just before I made the move over to triathlon). Plus with a backdrop like Hamilton Island it’s hard not to have a grin from ear to ear!! I was stoked with how my little game of "catch me if you can" had played out! 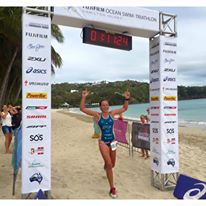 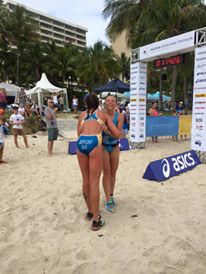 Soaking up the celebrations over the next few days of a little "holiday" on the island- Scuba diving for my early 21st present, swimming with my first Sea turtle (and managed a selfie with “Crush”)  a wind surfing lesson, 'SUP’ing, One tree hill sunset dinner & drinks, a run to Passage Peak, getting my ass handed to me at put put golf & a day trip to the Whitsundays Whitehaven Beach. Which I was lucky enough to win for us as a prize from the race & generous sponsors of the event, making it a brilliant #athletelife "day in the office" & payday! 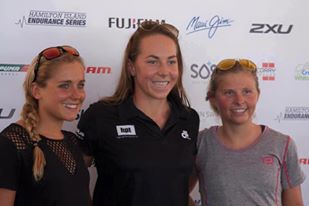 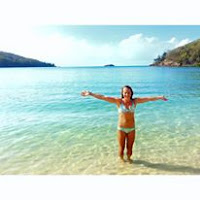 It's safe to say we had an absolute ball & will be back racing again next year! Sorry to bring it up too Dad but it is your big 50 for the race date next year... Why not come celebrate... Hehe ….planting the seed early!

With a short turn around I had my feet back on the ground in Sydney for all of 12 hours before heading back to the Airport. This time the HPT U/23 "pro team" of Liam Rapley, Brady Goodyear & myself were headed to West Sumatra - Indonesia for the Pariaman Asian Continental Cup Race, the last for the season with many athletes vying for valuable 2016 Rio Olympic Qualification points. 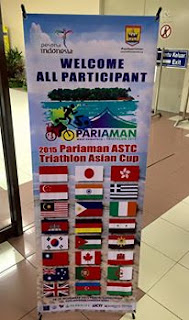 With enough time to unpack, repack, sit down for Dad's birthday dinner, get a few hours sleep, hit up swim squad, run, go see my horse Cherokee for a pre flight ride on her 26th birthday & quickly grab a coffee on route for my 10 am check in cut off haha. Mum has always rated time management as one of my strong points!

Landing in Padang West Sumatra is was a 180 degree change from the Paradise of Hamilton Island but with each race brings the opportunity to embrace new cultures, cities, locations, foods & people, if you chose to view it through the right mindset! We rolled with the punches & adapted as needed, quickly learning that this race would be one that needed patience & a translator app on the phone… 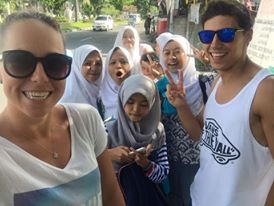 Race venue was on the beach at Pariaman, about 60km up the coast from any major cities of West Sumatra. The conditions were very hot & humidity was sitting around 75% with an easy bet of thunderstorms from about 4pm every afternoon. Riding the course familiarisation with a full police escort, a military guarded athlete lounge on race day & the biggest crowds I have ever seen lining the streets & beaches all along the course it was a race I wouldn't be forgetting any time soon (although I wouldn't mind forgetting the look of rice for a while as it was served 3 meals a day) 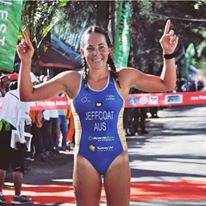 The race played out perfectly to my favour! Knowing I was up against some strong Former Olympians in the Japanese girls I knew I had to bring my A game. With a beach start & small shore wave I quickly used my history of surf life saving to my advantage to get out in front from the start & the race soon turned into another race of "catch me if you can!" Pushing myself on the bike to maintain my solo lead I had on the chasing pack of girls I was pulling away in front further each of the 4 bike loops & quietly revving up for what might be my second Continental Cup Victory. Coming off the bike I was rewarded with a comfortable lead, Although still pushing myself to run hard off the bike to clock a 17:20, taking the victory with no chance of moving off my Cloud 9 any time soon!!! 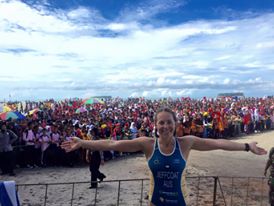 The chance to see the Aussie flag raised, hear the National anthem & stand on top of the dias is something I strive to get more of & will carry with me as motivation when I come back from my short break now into the new year!! Proud as punch of myself & the hardwork laid down this year not only in the long hours of training but with the support of my amazing coach Mick Delamotte, my incredible family who I owe these opportunities, expanding family of friends haha, supportive mates, my home squad environment ~ HPT, the AIS NTA Program, Triathlon Australia & unreal sponsors in Avanti cycles & the gang at AvantiPlus Narrabeen, Sydney University Elite Athlete Program, Catfish Designs Swim & Active wear (Absolutely loving my custom trisuit), ProAV solutions & Le Bent!! 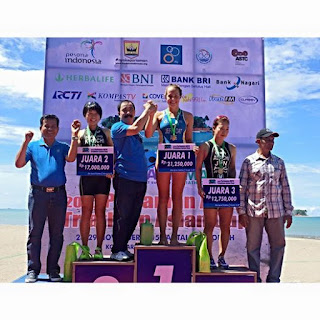 So what now.... (Yes it's me I always have a lot to say but I'll wrap it up now... If you've read this far) I'll settle back home, take a small break which worked perfectly to enjoy my 21st Birthday Celebrations (the 2nd of December) before competing in the North Curl Curl Surf Club ‘Three Point Challenge’ Aquathon Enduro Event, with my best mate Madi Quinn for the Star Light Foundation (A worthwhile cause very close to both of us!!) Before 2 weeks clinical Placement for my nursing Degree at Westmead Children's Hospital, my favourite day of the year - CHRISTMAS, summer time fun/ adventures & settling back into the daily #athletelife ready for a BIG 2016!!! 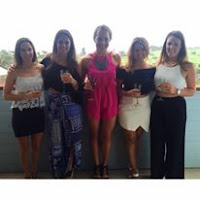 Stay tuned....
Thanks for all the love & support legends!!