APRIL – My first big dance on the blue carpet!

April, another month building blocks stacked, more tools in the box, a notch in the belt! Coaching analogies aside it was a great quality month of training & some SUPER Racing!! 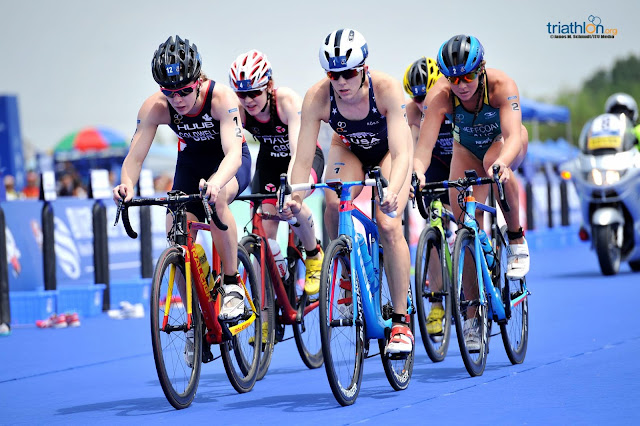 After selection by the Triathlon Australia Elite Selection Committee last month I was head down, butt up to start the month, getting ready to really “Race” my first World Triathlon Series Event- my first BIG DANCE, a run down the blue carpet with the world’s best! I couldn’t wait to rip in! 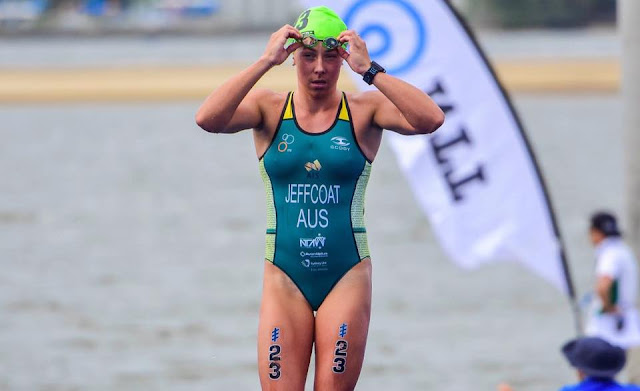 I was thrilled to have the oppourtunity to step it up & race proudly apart of the Triathlon Australia Elite Team racing my first WTS on home soil up on the Gold Coast! A race within a race as it doubled as the Comm Games Test Event & the first of two Australian Commonwealth Games Automatic selection events, the second being in the Hamburg World Series Event in mid July. The first Australian across the line in the top 10 would earn the Automatic selection spot on the Team for the 2018 Commonwealth Games in a years’ time over the same course! Super exciting hey! 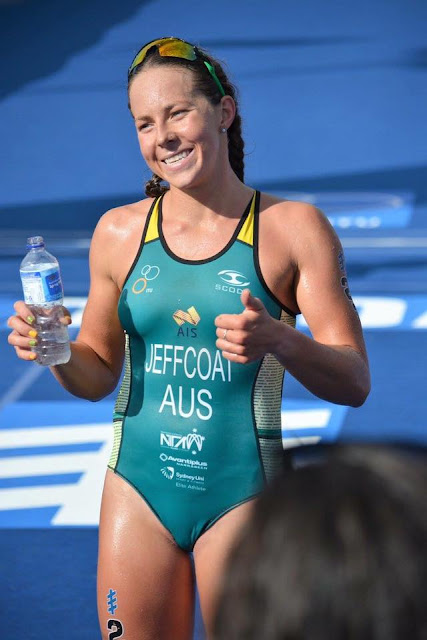 We arrived up on the Gold Coast with plenty of time to settle in, with some big Triathlon Australia Elite team events to welcome in the “1 year to go” Commonwealth Games celebrations! Arguable the most exciting for all was the revelation of the new Triathlon Australia Elite Team Trisuits and Uniforms designed especially by Scody. These new uniforms are pretty remarkable, showcasing featuring Australia’s rich & dominant history within the sport! Featuring the names of all of our former World Champions, Commonwealth medalists and Olympic Medalists! What a way to inspire us as athletes! Racing with such pride and history- It certainly is my goal to earn my name onto that suit! Well done Triathlon Australia and Scody for our terrific new uniforms!

My preparations in the lead up to the WTS were nothing different, Mick & I working to keep it simple and not get ahead of ourselves! I was feeling comfortable about my race process objectives I wanted to nail & ready to roll come Saturday Race Day! 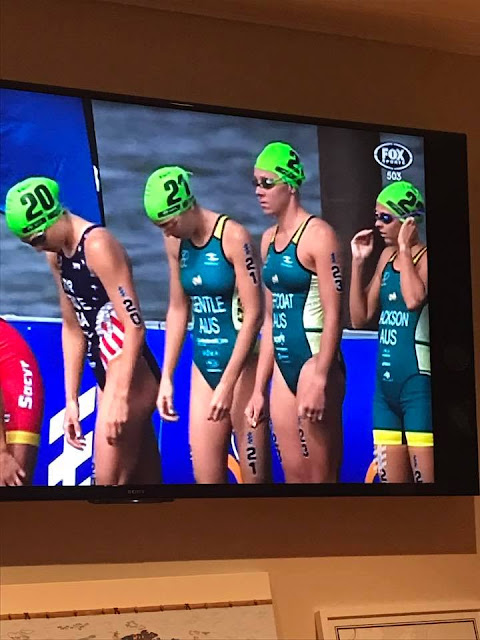 I was lucky enough to have the best support around me up at the race, with my beautiful Mum and best mates Madi & Tanya flying up to be there to support me, watch, cheer, celebrate & double check my head stays screwed on straight haha. I also had Mick’s family there for the race with his 3 young nephews making the best green & gold “Go Emma” posters I’ve ever seen! Plus so much love & support back home form everyone watching live! And not to mention the whole Triathlon Australia Elite Team of Staff there to help with everything us athletes needed! SO thankyou! 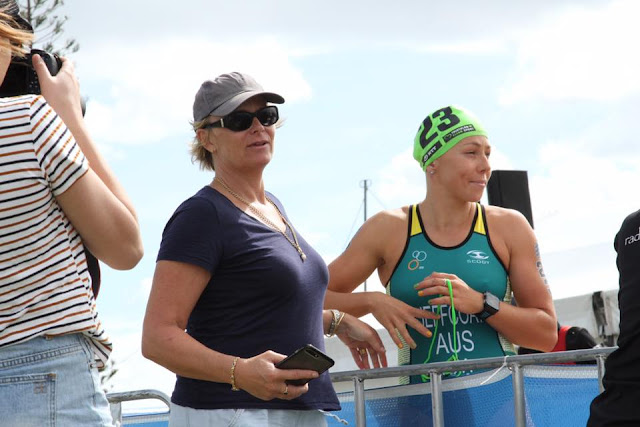 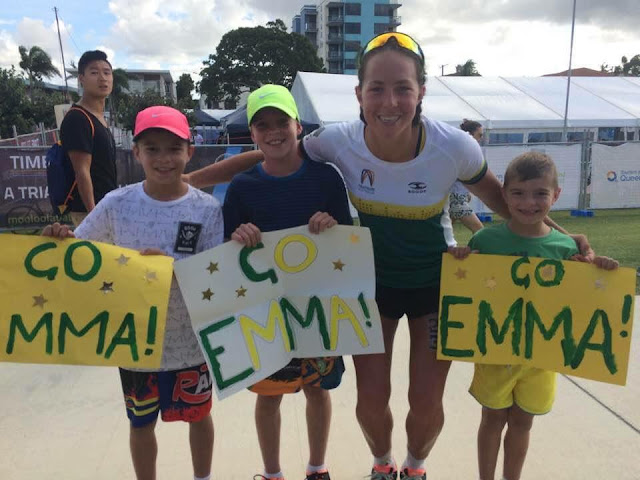 Racing kicked off at Southport for the Elite Women at 2.06pm. The Gold Coast produced some great racing weather- sunshine & blue skies, crazy to think that Tropical cyclone Debbie had only ripped through the same area a week prior! I was starting as number 23 and was bouncing around pre race ready to rock and roll, who doesn’t love those pre race nerves… Its what we live for after all! 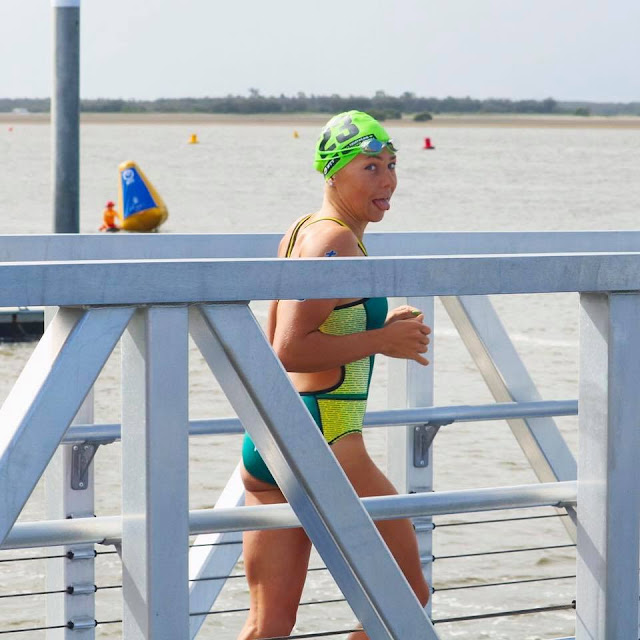 Running down to the line I was pumped to rip in & step it up, time to see where I sit today among the Worlds Best! I got off to a clear start and was fortunate to have some quick swimmers around me, leading us out into clear water and space! Sitting happily in third avoiding the chaos around those swim buoys as we turned for home into the choppy water. Exiting the water towards the pointy end of the field, I could already hear my friends and mum screaming yahoo! 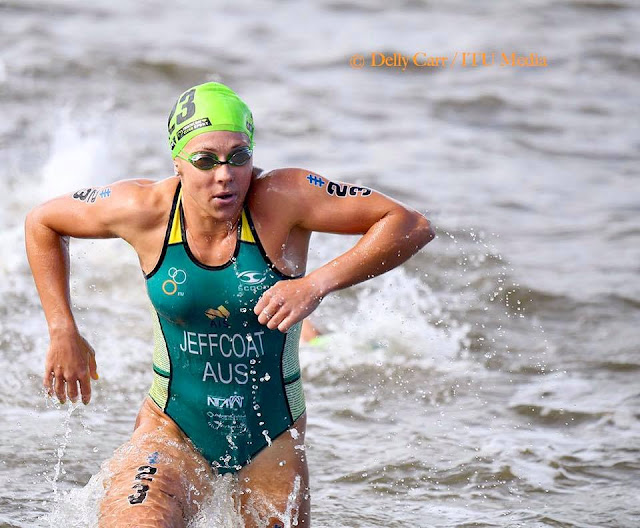 Getting out onto the bike where the chasing field was quick to work there way onto us 4 up front! Numbers quickly doubles & then doubles again! Before long the chasing 2 packs had used the incentives and worked hard to catch us up front and by the middle of the 20km 4 lap cycle leg there were about 35 of us Elite Women sitting together! Now a jostling game & challenge to avoid the 2 wheeled tricks some athletes pull out on course haha. A little disorganized at times with no one really willing to put down the hard work once packs came together so it was a race of sticking in!
I was pleased with how I rode out there on course, but as always there is plenty to learn from & improve at! But as I got off the bike up front into transition I was ready to battle it out on the run! 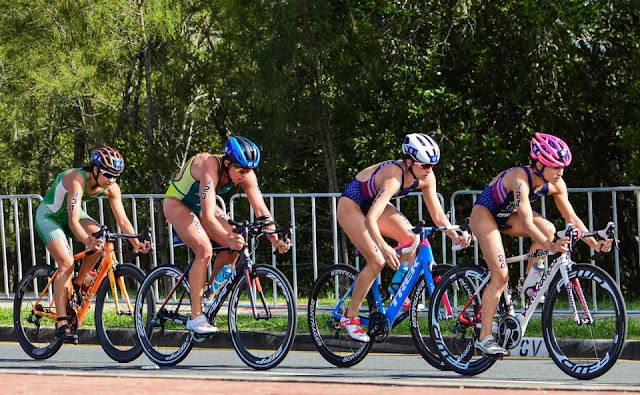 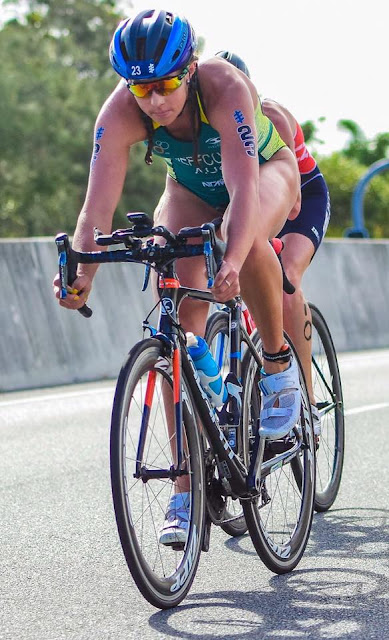 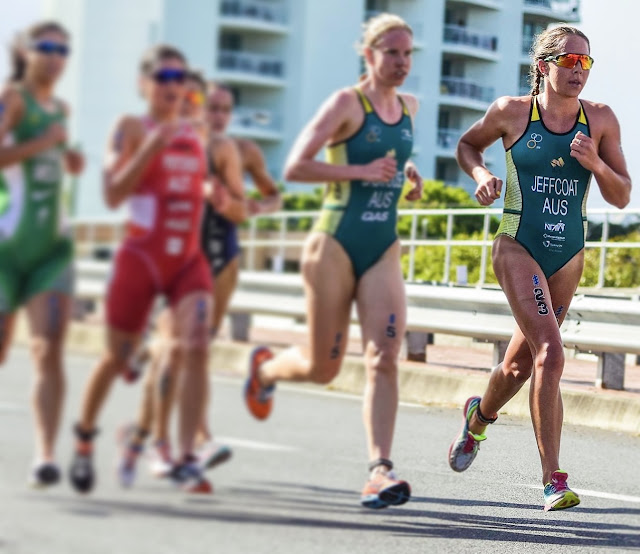 It was awesome, I loved every minute of that run, I stuck & felt great out there! A real boost as I pushed myself to bring it home strong, even coming out on top sprinting down the blue carpet!! It could certainly look prettier but on that day it did the job, I got my big dance!! Thrilled to cross the line in 11th after a closely contested race! 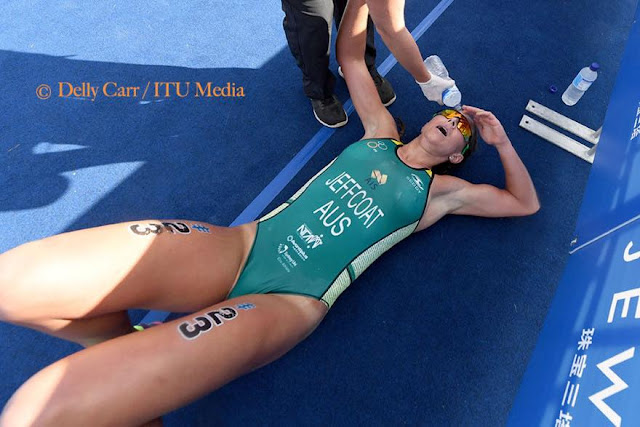 A giant bear hug & kiss from mum across barrier, cheers and celebrations with my friends & some great feedback from coach Mick! And of course, a cheeky thumbs up to the TV Camera! Safe to say I was really stoked with myself in my execution of my first World Triathlon Series Race, the first of many years of Top level international racing to come I hope! 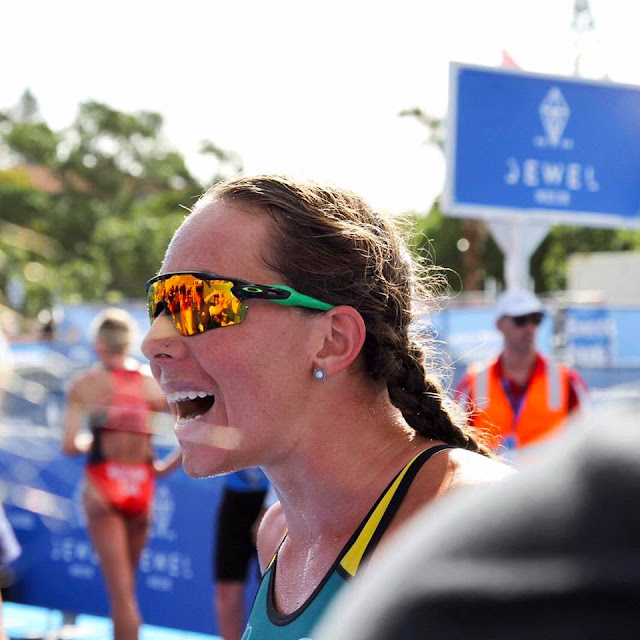 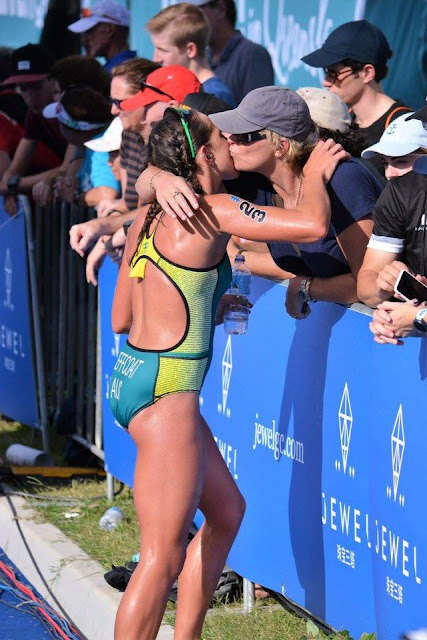 A huge Congratulations to Ash Gentle, who crossed the line in 2nd behind the inspiring Andrea Hewitt to take a well fought Automatic Selection Spot on the 2018 Commonwealth Games team!! And in the men’s Jake Birtwhistle gained the male Automatic Selection spot on the team finishing in 5th just behind the World’s Best men! Very happy for both of my fellow athletes!

Heading home one very happy athlete!! I unfortunately missed the Triathlon Australia Awards night on that Sunday but had a Monday Morning final Uni Exam to return for, the joys.. 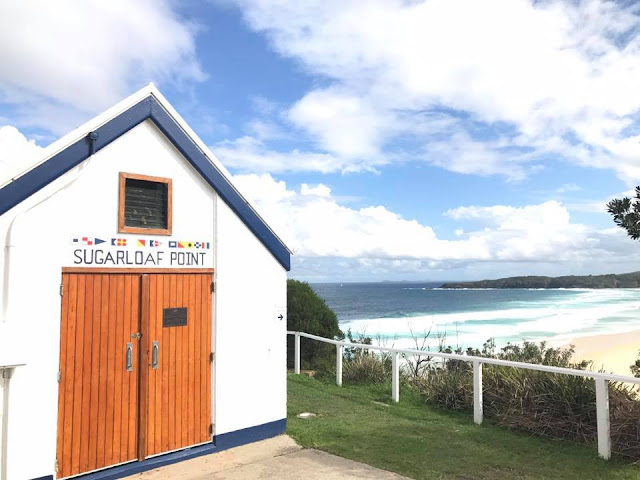 Finishing off my mid semester exams I was lucky enough to have my family time in a perfect few days getaway to our second home up at Sugarloaf Lighthouse in Seal Rocks! One of my most favourite places in the world & I love being able to head up here, pretty hidden away from everything for some quality family time, sun, surf, water, relaxation & adventures! 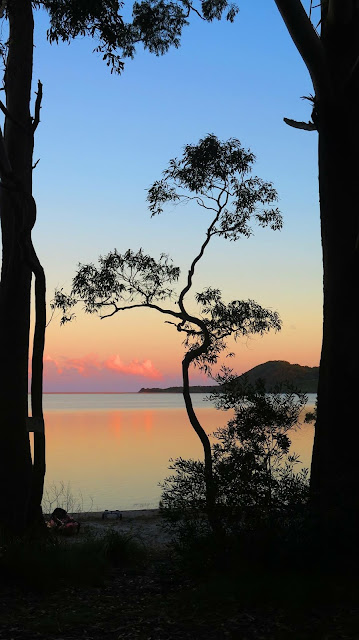 Enjoying a great Easter break & plenty of chocolate… my favourite! Not that I need an excuse, but Easter gives no judgement when having eggs for breakfast, Cadbury eggs! Haha. 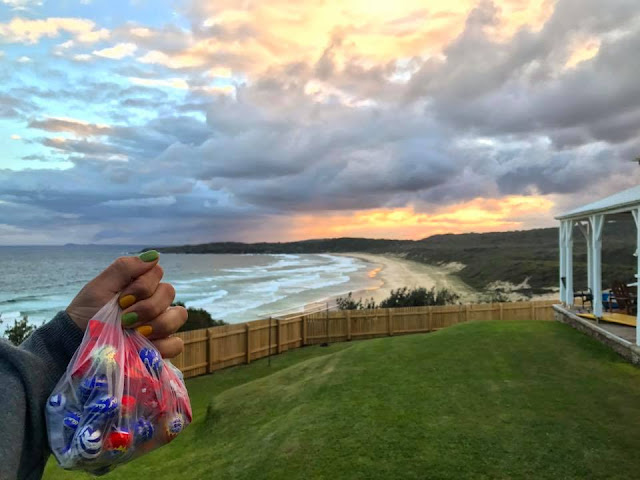 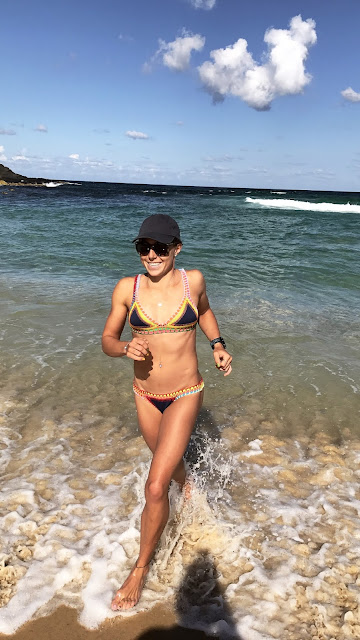 Finishing off the month settled back into some quality miles & training, with Mick and I drawing from Gold Coast to work on plenty of areas of improvement!! 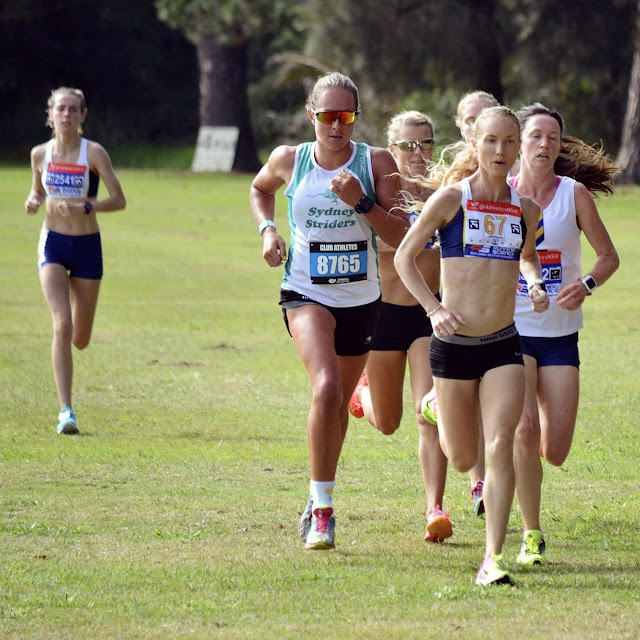 Next up was Chengdu World Cup in China. After a lengthy 3 hour wait at the Chinese Consulate I got my Visa and headed over! I’d never been to China before & was excited to see what was in store here! Safe to say the phrase “Only in China” became common place & it was certainly an interesting week here before some awesome 2 day racing! 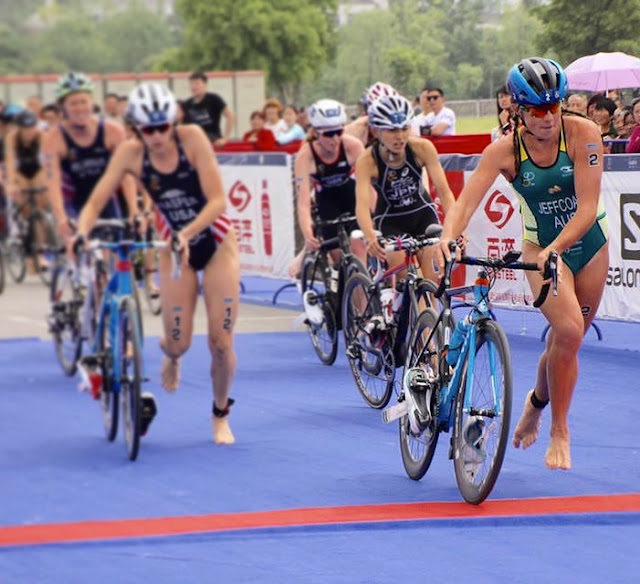 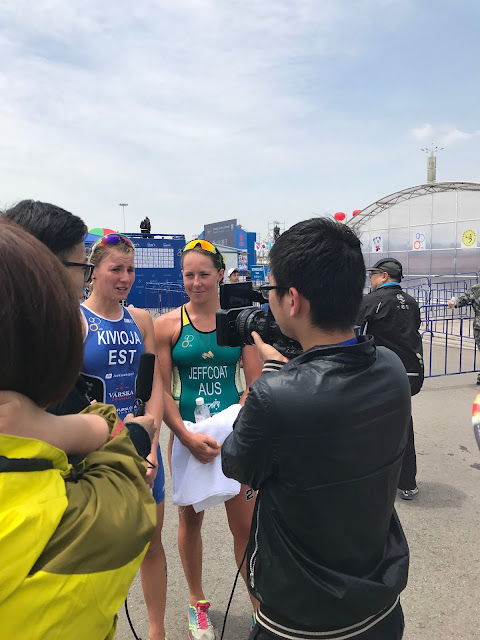 The racing kicked off on Saturday in a very unique format where we competed in a Sprint event on Saturday in 2 heats over 750m/20km/5km racing to finish in the top end of the field to earn a spot on the start line for the “A” Final on Sunday. Where we then raced over the super sprint distance- 400m/10km/2.5km. It was some awesome racing, a super exciting format, FUN & QUICK! But more on Chengdu World Cup in next month’s update! 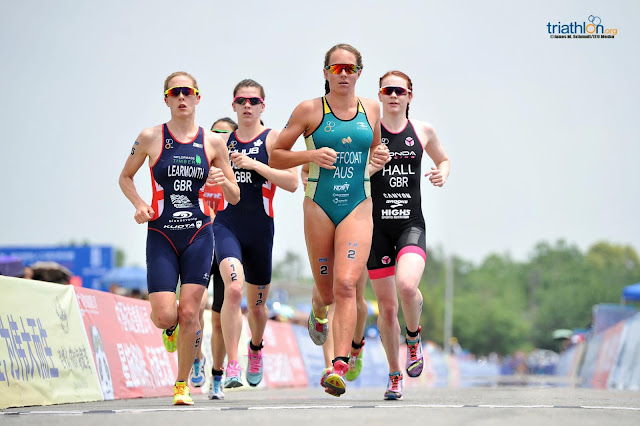 I’m currently halfway through a movie, “Hidden Figures” on an overnight flight on route to Sydney from Hong Kong (after leaving Chengdu). Enjoying the peace & down time now because when I land its straight to University for my final ever practical exam! Let’s hope I won’t have to use the jet lag excuse & get the green light, one step closer in the final stage of earning my Bachelor of Nursing! The joys, No rest for the wicked!

Thanks for all the support legends!