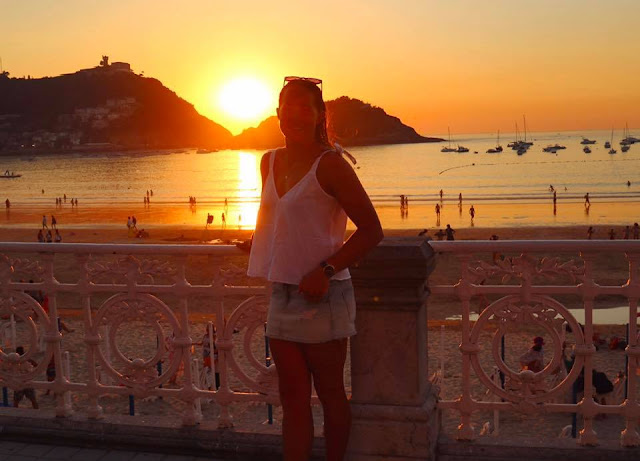 February, the last month of the treasured Aussie summer, how quick did that fly by! This month it seemed summer peaked late with our fair share of killer heat waves storming through Sydney! I'm a big lover of the fact that our sport allows us to be outside in the “office” swimming, cycling & running, and I enjoy spending down time relaxing outdoors by the beach so hopefully autumn doesn’t bring with it too much of a change as the days get ‘shorter,’ the mornings cooler & the ocean temps likely drop under 20. 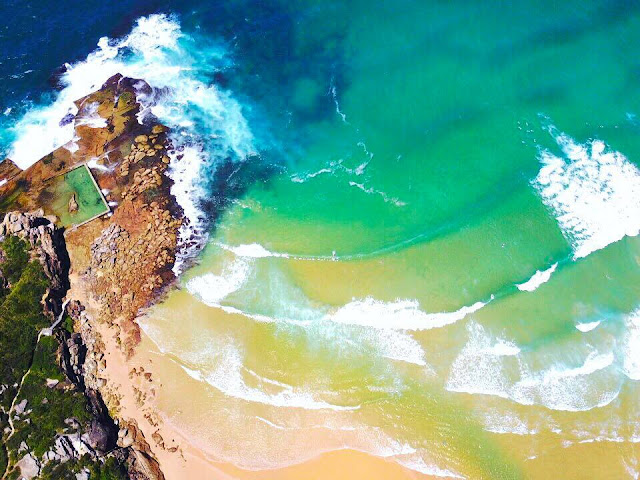 This year our domestic season of racing is a little more extended, with the familiar “regular” calendar races on a touch later in the year, so February looked a little different for me this time around. I could keep working away in a solid block of training with plenty of quality sessions rather than in a taper/ recovery mode when racing 3 or 4 back to back weekends with travel in between! None the less with the Triathlon Australia U/23 World Championship Selection policy being released it looks like March will be a big month coming up with the first World Cup of the year in Mooloolaba (Olympic/Standard distance) and Devonport-Tasmania (Australian Olympic Distance Championships) being the 2 automatic U/23 team qualifying races. These 2 fall within a week of each other & are both important races from many aspects so it has been nice to be able to stay settled with my head down working hard throughout February! 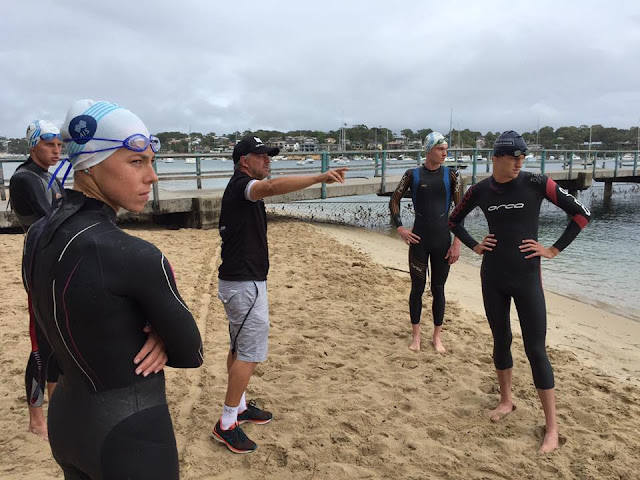 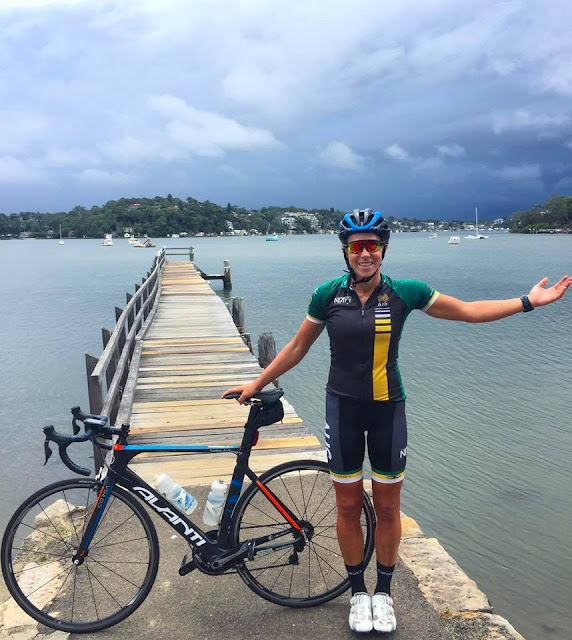 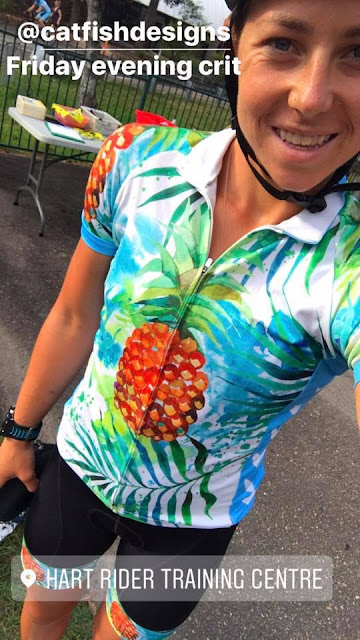 I kicked off 2017’s Triathlon racing & our Domestic/ Oceania season with the Oceania Sprint Elite & U/23 championships in Kinloch NZ, about 4 hours south of Auckland on the North island. A lovely town resting on Lake Taupo, with hills & forest surrounding! I've always been a big fan of NZ and that only grows with each visit back to this diverse beautiful country with its incredible landscapes & caring, enthusiastic people & culture! 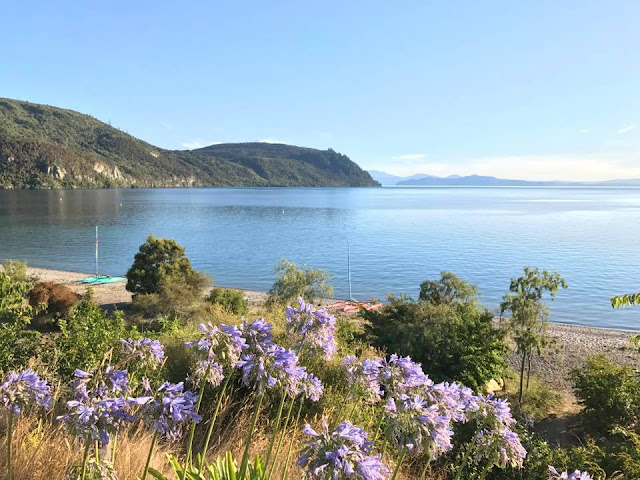 I headed across the ditch with fellow triathlete Tamsyn Moana-Veale. We made the drive down to Kinloch and settled in at a mutual friends holiday place- "AJ", who's home sits on the run course & one street back from the lake. Yep you beauty!

I had raced in Kinloch for my second ever professional ITU race 2 years ago & was eager to get back on the tough hilly course to see the difference 2 years hard work makes!
2 years ago I was out of the water in front but was quickly picked up by the front chasers on the bike before being dropped on the bike from the front pack, then the second pack... before managing to hold my own within the third pack! Yep, It was a tough race! 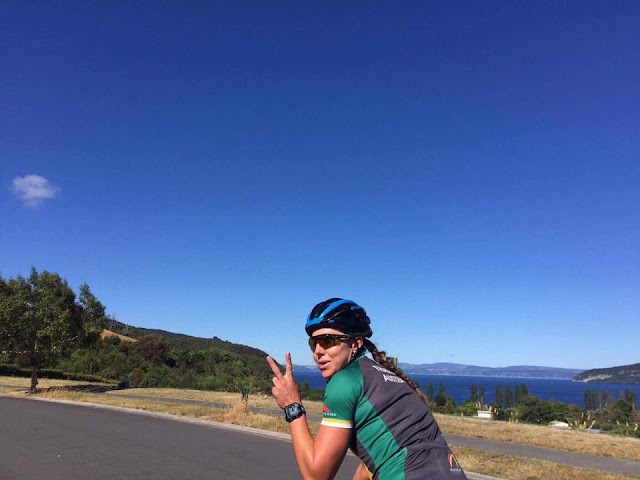 2 years on & I felt stronger & worlds more confident as Tammy & I rolled around the course, swim, bike & run for some pre race work! 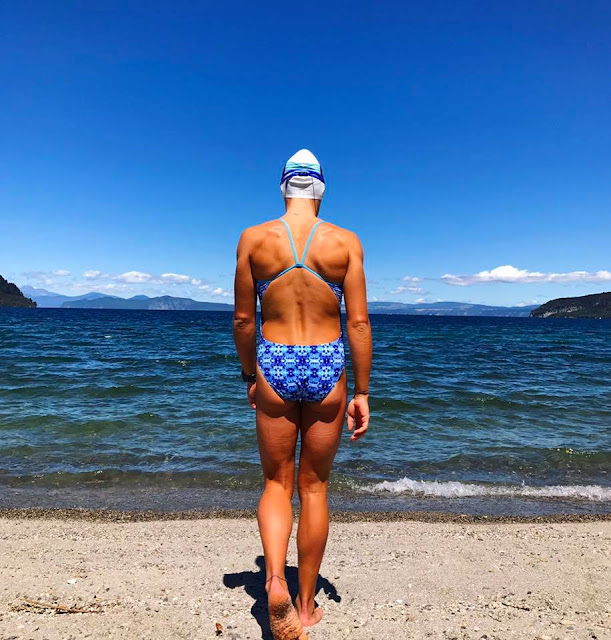 Race day rolled around on the Sunday & we were off first ahead of the men at 12.55pm. It was funny the Kiwi’s were talking about how hot it was and how they may struggle out there in the “heat” (mid 20's) lucky our 40 degree heatwave days in the leadup back home left us shrugging that off! With a water temp of just over 19 it was a freshwater wetsuit swim and the course was a one lap swim, 5 lap ride (up one steep punchy climb, 5 times) and a 2 lap hilly and fun run course through the towns streets, over a walkway bridge & through a Marina!

As I am ranked as the number 1 athlete in the Oceania region I was first to head down to the start line & pick my position. Always a cool welcome introduction being announced down as number 1!

We got underway with a clean quick start and it was on! Pushing the pace, distinct packs formed early & with no ease up on the bike in those initial km's those athletes just hanging onto our front pack popped and dropped off or never quite made it on. The bike course doesn’t really ‘give up’ making it tough on all, with plenty of technical sharp 90 degree turns, U turns, a steep hill Climb & descent plus various inclines throughout! I loved the challenge!


Our front pack quickly became 3 with Emma Jackson, Nicole Van der Kay & myself pushing the pace the whole 20km ride, able to pull away from the chasers & giving ourselves time & space to get into transition & out onto the run. I was very pleased with the difference 2 years had made, with a dominant race compared to the struggles of 2014! Hoping off the bike I felt good and tapped away in the lead until around the half way mark.

Emma Jackson came past & took the lead in the last lap & showed her experience to take the overall win & Elite Oceania Title. I was really thrilled with my execution on processes & the overall outcome in the first race of the season, finishing 2nd, earning myself an Elite silver Oceania title & U/23 Oceania Championship title! With Nicole rounding out the podium in third for a great day out in the office!

Heading for home the next day, only after a cold early morning run & icy swim in the Lake to wake us up before the long drive back to Auckland Airport!
A few athlete life troubles with flights found us on a new flight home, heading on Emirates through to Dubai apparently haha. But after one movie and dinner Tammy & I decided we better disembark in Sydney and get back to training! 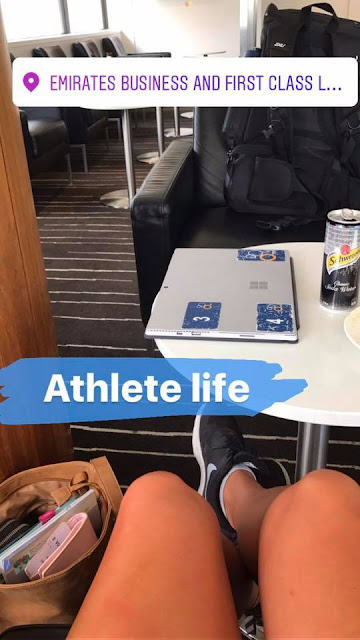 Onto another quality week down with the High Performance Tri crew before heading back to Sydney for the Saturday night Athletics NSW Open 5000m championships! (A 9pm race start… oh my goodness what even is that). I always love the opportunity to stick it against some elite runners & see how I go! This race was no different & after a morning long ride with some spikes I was a little nervous my legs might not treat me so well & I could get spat out the back in the Open Women's A race final! 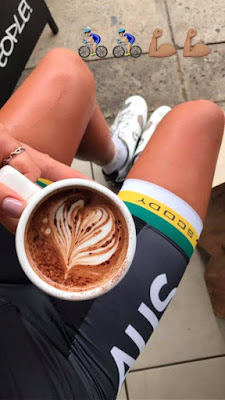 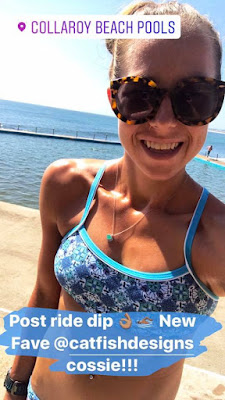 Repping my stand out elastic lace tied race flats & not too aero singlet I gave it a solid go & I was really pleased with how my race played out!! 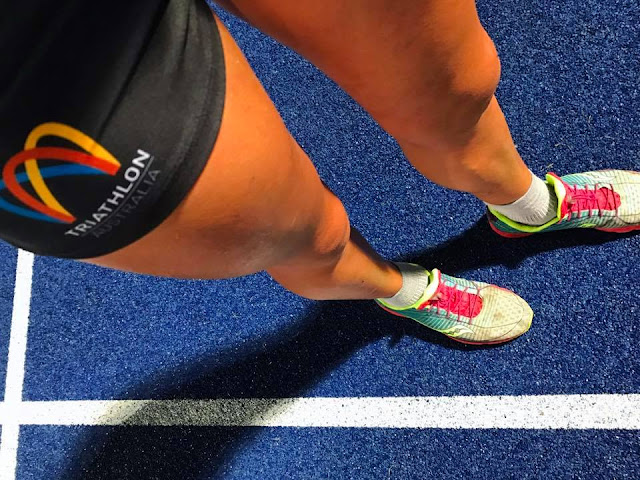 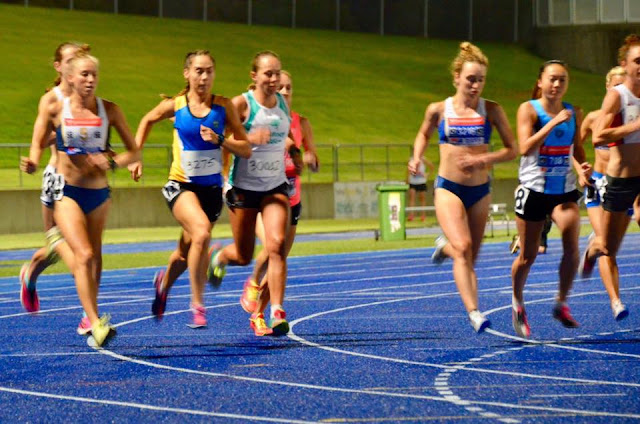 Holding a steady pace throughout I stuck on the hip of another runner I knew who would be a good hold! It worked a treat for the both of us, pushing each other in that last 1600m very well to try & get the best time for us both, coming down the straight in a battle for the mid field places of 6th & 7th but in a tidy time of 16:46 for us both, and a great little PB for me over 5000m! A nice reward to end a solid week, and a a great indicator to build on! Happy days! 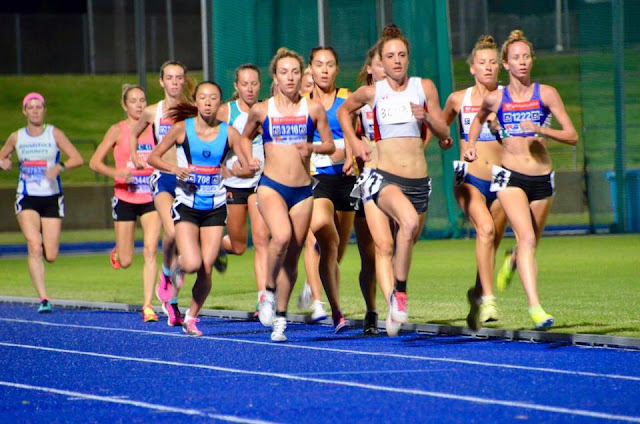 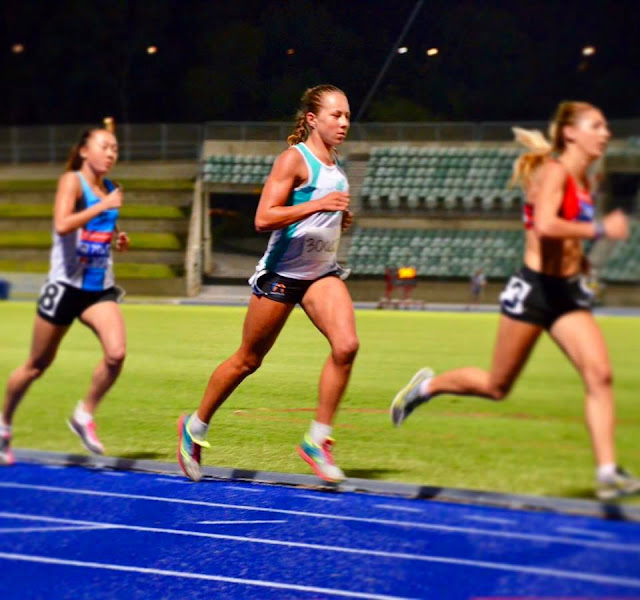 This month also saw a few big changes & great moments that I shouldn't neglect to mention!! My SUPA-mum got the all clear to come home from the Rehab hospital after going through a double hip & knee replacement in late January. She is the rock in our household so it was wonderful to have her back home, still mostly on bed rest, but lucky there's endless Netflix shows to watch! Towards the end of this month I was stoked to be able to take mum down to our backyard ocean pool at Collaroy beach for some water walking hydro therapy and enjoy a morning in the saltwater & sunshine! The best type of recovery- Vitamin D  & a good chat!! 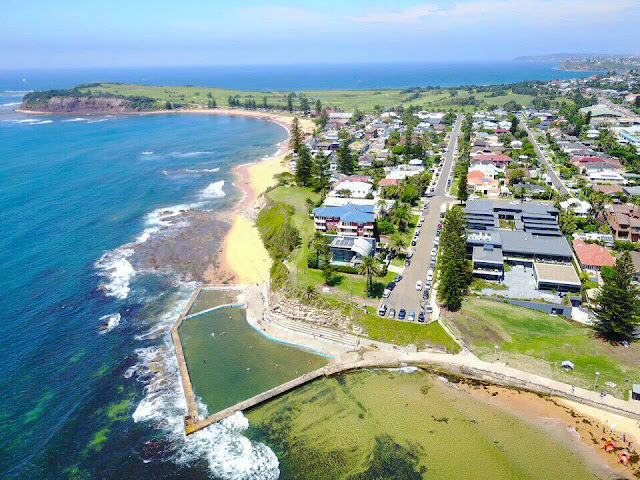 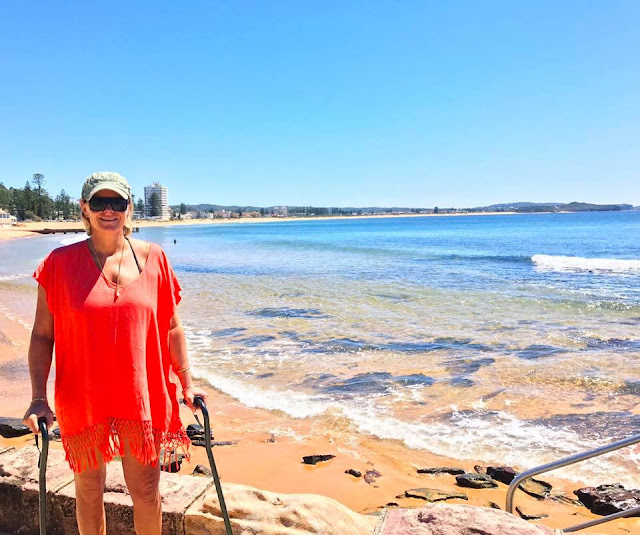 But as summer flew by, so does the Uni break! Meaning my little sister Meg headed back to Wagga Wagga in country NSW to continue her animal science degree, leaving our house a whole lot quieter haha. I really do miss that support we give each other & her little sister antics, but it’s so great to watch her as she follows her own passion!

Next week I too will start semester back at The University of Sydney, in my Final year of a Bachelor of Nursing. I hope I remember how to write an essay. Any takers for a pin prick tester I can use to perfect my injection giving.... Hopefully it's just like riding a bike after a long 8 months away from Uni studies having been overseas racing & training!
I'm very much looking forward to getting stuck into my last few units and using my brain again in something that's such an interest & passion for me to work in future!

I’m very pleased to announce I will start my final year of Nursing with the continued support of the University of Sydney Elite Athlete Program. (EAP) Such an amazing program helping so many talented top level elite atletes form all sporting pursuits achieve their goals both on & off the playing/ racing fields. I’m so lucky to have been part of the EAP since I started in 2013, with financial support, travel grants, helping with time away from study or rearranging timetables due to training & racing, Dietican, Strength & conditioning coaches, Physio & Sports Psych staff all on board! Truly a great program & a credit to the University of Sydney! 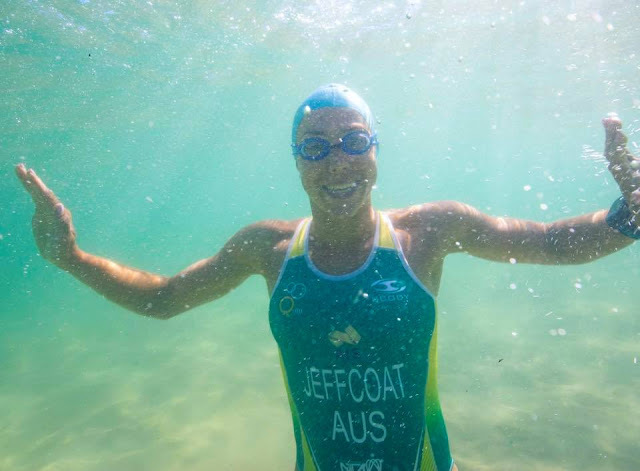 For now, back into some solid work before these next few big races roll around!! It will be a big exciting month ahead of racing & further opportunities- So stay tuned!!

Thanks for taking the time to read my Feb update & thoughts.

Enjoy the outdoor warm sunny training while it's here!