Hamjambo/ Bonjour/  Hello,
One of the many joys of travel, trying to pick up bits & pieces of languages along the way. For me this time round it was Swahili in the majority of Africa, French in the tropical paradise Mauritius, &  if all else fails most can handle the basic English! 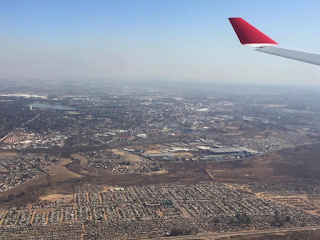 It's been awhile since my last blog entry but after what was the trip of a lifetime to Africa at the start of June I figured I better get back to it! Mixing business with pleasure, I was going over in the best form I had ever hit, it was all about the execution! Still pretty stoked, able to steal the win & coming away with the win in the 2015 African ITU Continental Cup in Le Morne Mauritius, just what I needed! 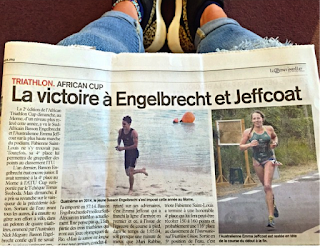 Heading off with mixed emotions having just lost my Beautiful Ma, I didn't know what to think! This wasn't how I pictured my lead up... But that’s life for you! Missing the services and being away from my family knowing what we were all going though was tough but there was no question, my Ma would have been furious if I didn't go! 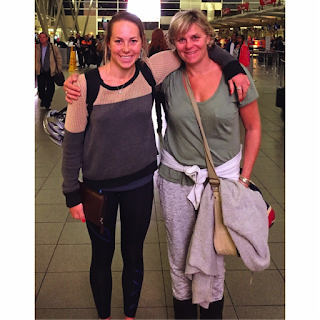 I'm starting to think my mum was right with the idea of sticking with swimming, a cap and goggles, that's it! There's something about a bike, it just gets lost. Somehow flying from Sydney- Perth and Perth into Mauritius my Bike bag filled with my entire luggage was sent to Dubai... With only 2 flights in per week to the small island bliss of Mauritius I was worried....
The locals weren't though, they didn't seem to get a mountain bike wouldn't quite cut it! 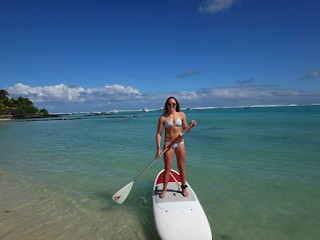 And as the saying , "it's who you know, not what you know" goes it served me right again! Mick had somehow managed to find an ex HPT athletes, sisters race bike that I could borrow, half way across the world! How's that for global support & coach contacts! 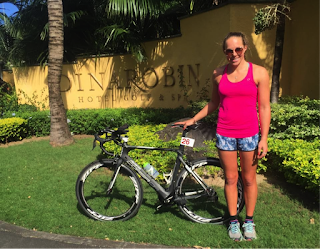 Needless to say my Avanti Corsa DR Di2 Race bike and ALL the excess baggage weight in it turned up the eve of the race, nothing broken (thank goodness) I was good to go! With a relaxed atmosphere surrounding it I was so pumped for this one, I was racing with the fire in my belly and I wasn't going to give in the win without a good fight! 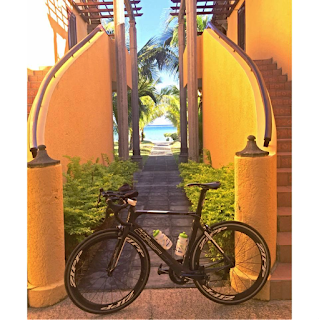 The race was situated in the INCREDIBLE Le Morne Peninsula, a spot I couldn't have dreamt any better if I tried! With endless palm trees, crystal clear blue water, white sand, a surreal mountain backdrop, delicious buffets & activities to die for like; Les 7 Cascades, Swimming with a pod of about 100 dolphins, galloping along the beaches horse riding and swimming the horses along the beach (post ride of course.....) with the added massage, SUP, waterski and sunbake post race too, it was a dream! I think the whole family will want to come "watch" me next year.... 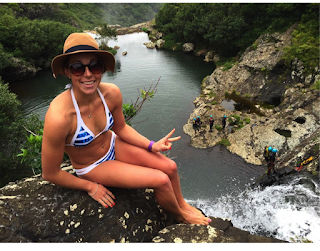 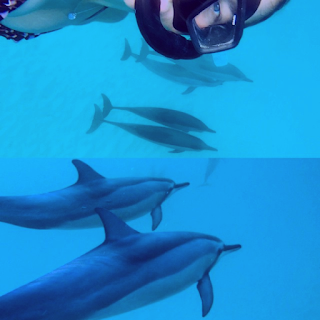 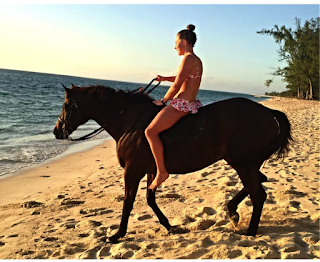 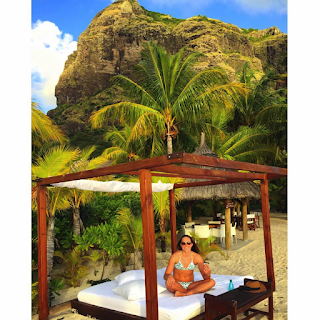 Race day, 7/6/15, arrived - 25 degrees in the water and only a few degrees warmer out! The swim was an ocean swim along the foreshore of the peninsular with the coral reef to offer a little glimpse of distraction during the race (yes this place was real). With a short and sharp 6 lap bike course, before finishing with a 2 lap flat and fast run to finish. 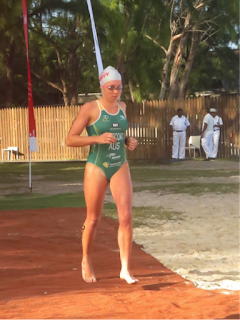 Pre race I was feeling pumped, with so so (**No do not delete repeated word**) much support from everyone back home I was just ready to go and smash it out. The usual hustle and bustle off the start, before settling in next to Marie Rabie from South Africa, an Olympic and Comm Games Athlete. We worked together to push away and come out of the water with a sufficient lead hopping on the bike!

Pushing the pace through the first few laps, hitting the turns & gathering an idea on how the race will play out! Seeing how far back the chase pack was from us, I knew it would come down to a run race between Marie Rabie and I, backing myself to be up for the battle having come into some great run form leading into the race. Making sure I hit transition first, to get out any slight advantage I could, we soon were onto the Money leg! Side by side for the first 1.25km straight I pulled away early feeling good before being raked back in by Marie, taking notice of her breathing and form I could tell she was fatigued and breathing much heavier than myself, my bet on myself just went up! 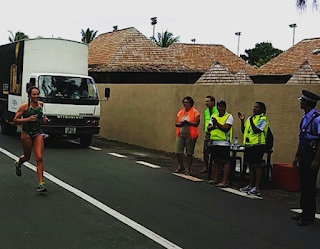 Coming back to the half way mark I surged again to pull away but this time Marie didn’t follow, the rubber band stretched, getting some local cheers of support at the turn around I got to see the lead I had, of about 50m, my momentum gained and I pushed hard for the next 1.25km to increase the lead & snap the rubber band, it worked! Turning around at the far end with 1.25km elf tot go, I could see the approx. 400m lead I had over Marie & the rest of field following, I was confident, smiling from ear to ear! Making sure I soaked up every second, enjoying that final home stretch moment, because lets face it you never know when the next one will come, and every athlete needs that scenario playback on those tough grinding weeks of training! 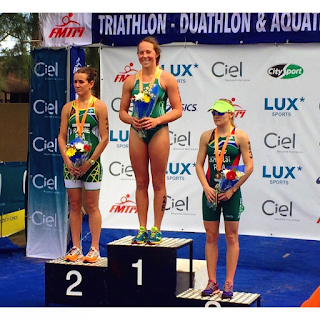 Crossing that line in first with my first Big Continental Cup win & Getting up on that Dias at the top position, I wanted to bottle that feeling up!
Having the privilege of singing the Aussie anthem watching the Australian flag being raised for the first time is something I'll always remember, despite my attempt to drink the rest of my champagne after the Iconic champagne showers on the podium… only to find out it was non alcoholic #athletelife!! 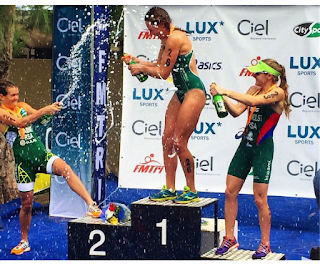 A big spoonful of self belief (not to mention reinforcement from Mick, fellow athletes, family and friends) really does go a long way!! And as they say, it's 80% mental and 20% physical in this sport! I was so proud of myself, I had dared to dream, gone out and done it and not only that but I had been able to do it for my Ma! That last lap of the run, I had a little birdy on my shoulder bringing me home with a massive smile ear to ear! 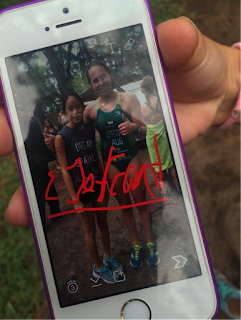 Blessed with the opportunity to go on from Mauritius and explore Africa solo, I was able to let this race really sink in! From here I headed onto South Africa spending time in Johannesburg, opening my eyes to a new side of life, before traveling onto the Okavango Delta in Botswana for an INCREDIBLE 21st present, a horseback African Safari (Thankyou Mum & Dad), and then Zimbabwe and Zambia for some of my kind of “Relaxing” aka. Bungy Jumping, Microlight flight and a Swim at the edge of Victoria Falls! The trip of a lifetime!! 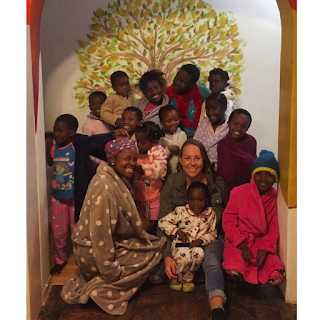 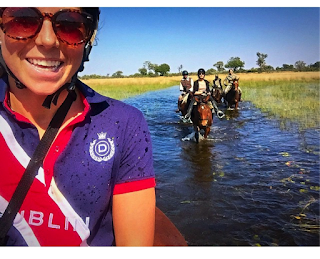 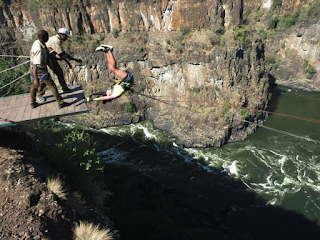 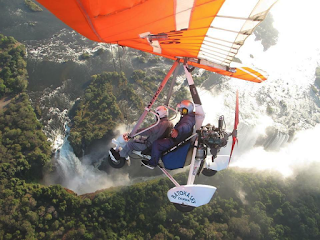 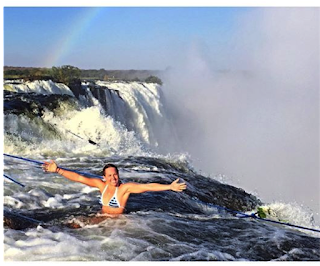 Now, I'm settling back into a base phase after a week away with the HPT U/23, & Junior squad at the beautiful olden day country town of Mudgee, where the cafes have to outsource more milk after we walk in looking for 20 skim milkshakes!!! With some super cold weather but plenty of cycling to keep us warm!! A great kick starter camp run by Mick with some great planning. So excited for what's to come over the next few months leading into a big 2016 on the cards!!! 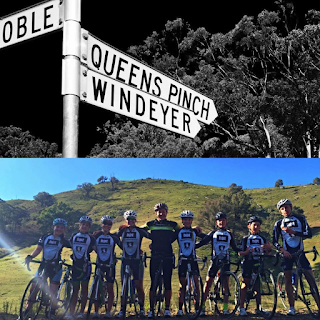 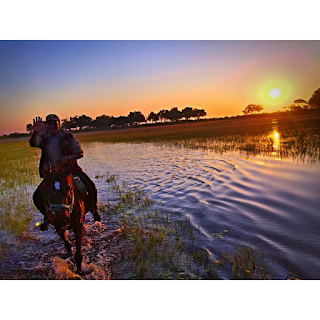